Relaxing in the great outdoors amidst the hustle and bustle of busy life is the inspiration for Vale of Clwyd professional musician, Ynyr Llwyd’s new Welsh EP, ‘Awyr Iach’ (Fresh Air).

In his latest album, the third released by Aran Records, the maturity of the singer songwriter is evident. Having experimented with various styles over the years, he feels he has found his own sound whilst writing and recording these songs for the new album; acoustic rock and pop. 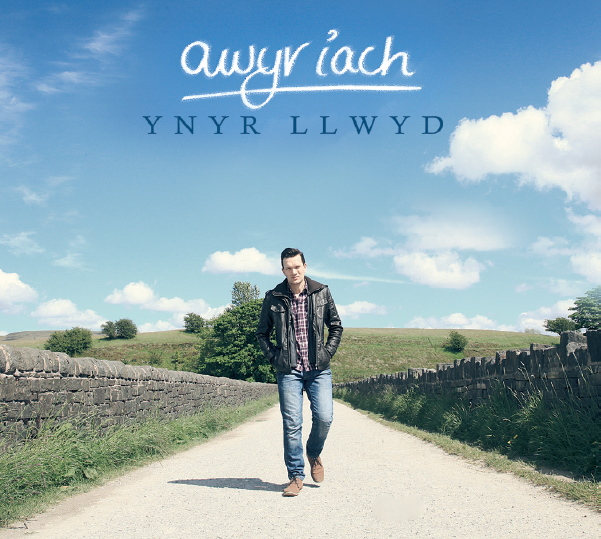 “Every artist matures by drawing on his or her experiences, and I feel that I’ve found my voice with this new EP” explains Ynyr, 27.
“It was great to collaborate in the studio with a group of other musicians whilst putting this latest collection together. I had the opportunity to co-produce the tracks with Emyr Rhys in Aran Studios, as I also enjoy that aspect of the recording process.

“We used a live band to record in order to add some character to the songs, and in addition to the usual instruments such as guitars, drums and keyboards, we’ve included a few other interesting sounds such as banjo and tuba on some of the tracks. There’s plenty of variety within the songs in terms of style and tempo, so I hope the listeners enjoy hearing the new material.”

There’s plenty of variety in Ynyr’s life too, as he is not only lead vocalist of his own function band ‘The Right Stuff’, but managing director of the band’s entertainment business as well. He also keeps himself busy leading composition workshops in north Wales’ schools.

“I’m very fortunate to have had some wonderful opportunities as a musician with ‘The Right Stuff’, travelling and performing on cruise ships to the Caribbean, America, The Med and Scandinavia. Recently, our work has mainly been UK based, performing at various functions, weddings and other events,” Ynyr explains. “It’s the variety of this business that appeals more than anything – one week we’ll be performing in a castle in Scotland, the next we might be at a wedding reception on board an Elizabethan boat sailing down the Thames.”

With his Master’s Degree in Composition at Bangor University in 2011, he’s been able to offer his ‘composer’s guidance’ service to secondary schools across north Wales, helping music pupils develop their composition skills in order to improve their work. Working with youngsters in schools, Ynyr is probably following in his mother’s footsteps, the renowned singer and voice tutor, Leah Owen.
The young musician who is now married has composed songs for other artists too, including West End star, Mark Evans who reached number five in the ‘World Music’ iTunes chart with Ynyr’s album track ‘Adre’n Ôl’ (Back Home).

As well as composing songs, Ynyr creates instrumental music for other exciting projects, such as dramatic dance productions, and has composed pieces for the media, including a documentary series about traditional travellers, ‘Y Sipsiwn’ on S4C.

“It’s a great feeling to release new songs again after a break from the studio. Some of the inspiration for the album came to me as I went for a walk to clear my head after a busy week of work. We had a lot of fun breathing life into the title track of the EP ‘Awyr Iach’ and I’m sure people will realise that this song is quite different from my usual style of writing,” Ynyr explains.
There are lively tracks like ‘Am y Tro’ (For Now) and ‘Lliwiau (Colours) on the album, as well as relaxing songs like ‘Cysur’ (Comfort) and ‘Mynd dy Ffordd dy Hun’ (Going your own way). The track ‘Un Lleuad’ (One Moon) refers to the distance between himself and his girlfriend when they spent some months apart due to work commitments, but still felt connected seeing the same moon from their different locations in the world. It is a song filled with emotion as both the backing vocals and rich guitar sound add to Ynyr’s message.

“’Am y Tro,’ (For Now), theorises how today’s little worries can seem insignificant tomorrow – when things are put in perspective. It is a lively catchy song with a clear message that tomorrow will arrive and as we have no idea what will face us we might as well stop worrying.”

Although Ynyr has crossed paths with the odd celebrity, such as Ronan Keating, Jocelyn Brown and Will.i.am during his career – and performed in exotic places such as the world’s only seven-star hotel in Dubai, the musician from Prion, near Denbigh is proud of his roots and his ability to compose and perform in Welsh.
“I am extremely fortunate to have such variety in my career and I sincerely hope that I can continue to earn a successful living as a professional musician in Wales and beyond,” said Ynyr.