Come to sing and play with.... Ffrindiau’r Wyddor (Alphabet Friends)

Here is a great CD for young Welsh learners!! A collection of songs that introduce the letters of the Welsh alphabet in a light, simple and fun style. Each letter is associated with a certain character and the melodies and the words together with the colourful accompaniments combine to produce an exciting way for children to learn the entire alphabet. There is also an opportunity to listen to the songs without the words. This provides the opportunity for movement, dancing and other creative tasks. The children can sing the songs either individually, in groups or sing along with family, friends and teachers. 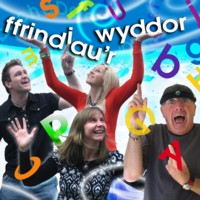 As this is a mixed media CD, it can also be placed into a computer, where the CD-ROM portion provides access to copies of all the words and the music.

The words and music were written by Gwenfydd Williams during her time as an Early Years Teacher at Ysgol Dewi Sant, Rhyl. The children were always singing, moving, dancing and having fun and Gwenfydd recalls that it was an excellent way of teaching Welsh, especially for children who were learning Welsh as a second language. The children were always expressing themselves through the music and remembered the sounds of the letters by playing and singing along with the characters from the songs. The songs were then used to create a wider “Ffrindiau’r Wyddor” project where stories were added to the songs. By now this project is used in schools across Wales to develop language and literacy skills in the Foundation Stage

Before her retirement Gwenfydd was an Advisory Teacher with the Foundation Stage Team for the county of Denbigh. She’s convinced that teaching through play, movement, taking part and having fun is a fundamental part of each child’s development. What better reason therefore to rerecord these songs using all the facilities a modern studio has to offer.